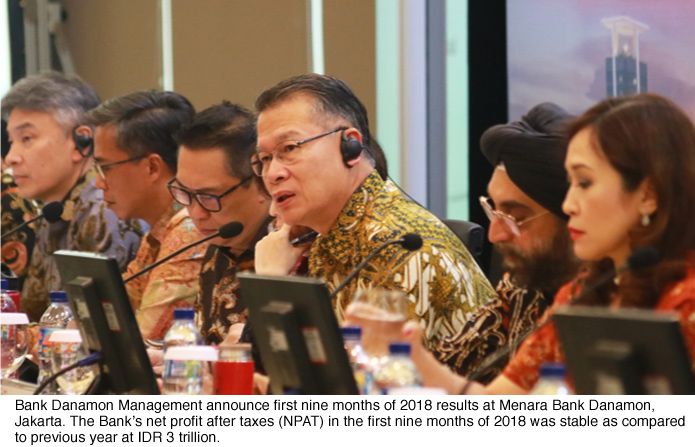 “One of our long term strategic initiatives is improving our digital service, which has garnered numerous accolades from renowned local and international institutions. Recently, Bank Danamon was named as Best Digital Bank in Indonesia for the second consecutive year by Asiamoney Magazine. Locally, Bank Danamon was named as Best Bank in Digital Service by Tempo Media Group. These recognitions underpin the Bank’s high standard of customer service that is driven by technological innovations and the latest best practices,” said Michellina Triwardhany, Vice President Director, Bank Danamon.

The Bank’s net profit after taxes (NPAT) in the first nine months of 2018 was stable as compared to previous year at IDR 3 trillion.

In terms of automotive financing, Adira Finance recorded a 12% year-on-year growth in total financing, standing at IDR 49.7 trillion at the end of September 2018. The double digit growth is driven by Adira Finance’s new financings, which grew by 14.8% year-on-year for the two-wheelers segment and 22% for the four-wheelers segment. This is in contrast to a 16% decline in new two-wheelers financing and a flat growth for new four-wheelers financing in the same period in 2017.

CASA balances increased by 3% to IDR 49.1 trillion, and CASA ratio improved to 49.1% from 47.5% a year ago due to improvement in granular savings account balances.  Time Deposits decreased by 3% to IDR 50.9 trillion as Bank Danamon let go of higher priced third-party funds. Improvement in Danamon funding structure led to lower cost of funds, setting up a foundation for long term growth.

Bank Danamon’s capital adequacy ratio (CAR) remained one of the best among peer banks. Consolidated and Bank-only CAR stood at 22.3% and 23.1%, respectively.

Non-credit related fee income grew 13% to IDR 935 billion. The improvement was mainly due to Adira Insurance’s net underwriting profit, which grew by 25% to IDR 447 billion. Bancassurance fee also grew by 11% to IDR 266 billion.

Bank Danamon continued to maintain its asset quality through prudent enforcement of risk assessment procedures, disciplined collection and recovery of debts. Special mention ratio has improved to 10.8% as compared to 12.1% a year ago, while NPL ratio was improved to 3.0% in the first nine months of 2018 as compared to last year at 3.3%. Cost of credit ratio was stable at 2.6% while restructured loans continued to decline.