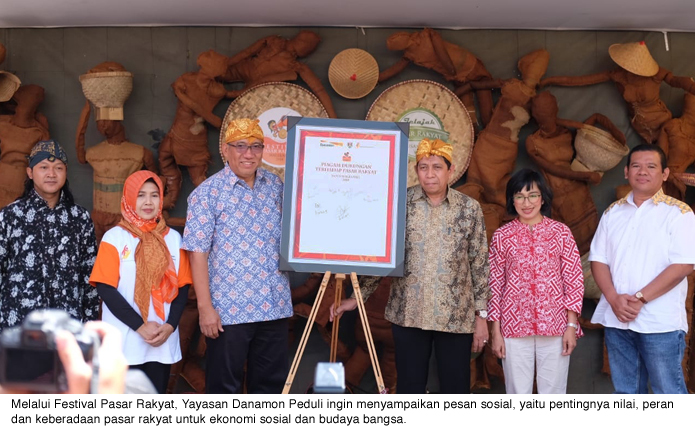 Magelang, 25-26 August 2018. Yayasan Danamon Peduli (“Danamon Peduli”) today inaugurated a pilot market and launched the Pasar Sejahtera (Healthy, Green, Clean, and Maintained Market) program in Rejowinangun market in the city of Magelang, Central Java.  Concurrently, Danamon Peduli also held Festival Pasar Rakyat (People’s Market Festival) Magelang 2018. Using “Terus Kumandhang!” (Continue to Excel!) as its theme, the festival is an effort to promote the roles and values of people’s markets (traditional markets) in a creative, educational, and cultural format. The festival and the Pasar Sejahtera program are fully supported by the Arts and Culture Community Forum of Magelang (FKSM) and the Magelang Municipal government.

“Danamon Peduli assumes the special role as a government partner in revitalizing people’s markets. Fundamentally, we complement and support the local government’s working plan that focuses on market development. We support the launch of the SNI 8152:2015 People Market national standard by the National Standardization Agency (BSN), which we are implementing under our Pasar Sejahtera program. This is a collective effort to create a people’s market that is competitive and productive, not only in an economic sense, but also socially and culturally as well as supporting local tourism,” said Restu Pratiwi, Executive Director, Yayasan Danamon Peduli.

Since 2010, Danamon Peduli conduct its Pasar Sejahtera program with a focus on: (i) physical revitalization of the market and (ii) non-physical revitalization, such as institutional capacity building, educating stakeholders on the market, and promoting the roles and values of the market. Starting in 2015, the Pasar Sejahtera program ascribe to the SNI 8152:2015 People’s Market standard, so all pilot markets under the supervision of Danamon Peduli are guided to implement the SNI standard.  Currently, there are six Pasar Sejahtera pilot market, which are Ibuh-Payakumbuh Market in West Sumatera, Rejowinangun Market in Magelang and Pasar Bunder Market in Sragen, Central Java, Dasan Agung Market in Mataram, West Nusa Tenggara, Lambocca Market in Bantaeng, South Sulawesi, and Pandansari Market in Balikpapan, East Kalimantan.

Rejowinangun Market in the city of Magelang is the winner of the Best Innovation in the Pancawara Awards 2017 held by Danamon Peduli and the Ministry of Trade in the People’s Market Managed by Local Government Type I and II category. Their innovation was titled “Development of People’s Market as a Cultural and Social Space.” The Magelang Municipal Government is deemed to be highly committed in developing the people’s market, thusly compelling Danamon Peduli to submit a proposal to induct the market as one of Pasar Sejahtera’s pilot markets, in partnership with the Magelang Municipal Government for two years, 2018-2019.

Festival Pasar Rakyat is part of the national campaign called “Jelajah Pasar Rakyat Nusantara” (National People’s Market Odyssey) initiated by Danamon Peduli in 2015. This campaign serves to encourage the public’s involvement, especially the communities that grew organically, in the development of people’s markets. Through Festival Pasar Rakyat, Danamon Peduli want to convey a social message, which is the importance of the value, role, and existence of people’s markets, presented as a series of creative, educational and culturally-driven activities.

“We are impressed with the enthusiasm and commitment of the local communities in Magelang, which are represented by FKSM, during the procession of FPR Magelang 2018. We have witnessed the spirit and level of care of the communities and the youths here in promoting their local market. The local community and youths are proven to be able to turn their local market as a showcase of Magelang’s richness that can be emulated across Indonesia as well as the world. Magelang deserves to be a benchmark for people’s market development, turning the market into a centre for economic development as well as a social and cultural site that is beloved by the local populace. We believe that the process to raise the popularity of the people’s market requires more than just the government’s involvement. The active participation of an empowered local community is also essential to this cause,” added Restu.

In collaboration with the local Magelang community under FKSM, FPR Magelang 2018 uses “Terus Kumandhang!” (Continue to Excel!) as its theme and was held since 22 July 2018 until 25-26 August 2018 as the peak event. Supported by Heru Prasetya, a cultural artist from Solo, and 59 communities from a variety of sectors, involving 1,000 volunteers as event participants, a series of activities were held in Sidomukti Market (Decorative fishes market, bird market, and klithikan market) and Rejowinangun market. The activities include river cleanup and fish breeding at Kali Manggis, cultural show called ‘ruwat pasar’, session on the market’s history, various workshops, photos and drawing competitions, free medical check and blood donation, art installation, photo and drawing exhibition, mural paintings, and an array of competitions involving merchants and students as well as cultural art shows.