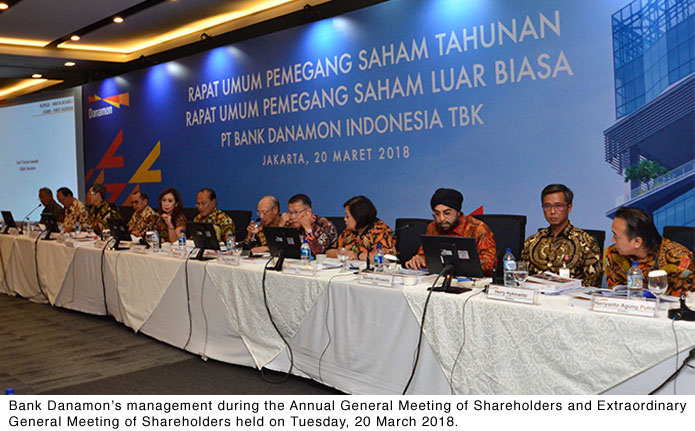 The Company booked Net Profit After Taxes (NPAT) of IDR 3.7 trillion in 2017, which is a 38% growth as compared to a year earlier. The AGMS approved the Company’s annual report and financial statements for the 2017 financial year as well as the ratification of the Annual Supervisory Report of the Company’s Board of Commissioners for the year ended 31 December 2017

The AGMS approved a dividend payment of 35% of the Company’s consolidated NPAT for 2017 or IDR 134.44 per share. Meanwhile, 1% of the profit will be set aside as general reserve in accordance to Indonesian Limited Company Law. The remaining profit will be recorded as retained earnings adding to the Company’s capital.

Changes at BOC and BOD


The addition of new members to the Company’s management team further strengthens Bank Danamon’s leadership, as it draws from the expertise of seasoned professionals with international and regional banking experience.The AGMS also appointed Mr. Jusuf Wibisana as the Public Accountant and Tanudiredja, Wibisana, Rintis & Partners (member firm of the PricewaterhouseCooper International Limited) as Public Accounting Firm that duly registered with the Financial Services Authority (OJK), to audit the Company’s financial report for the 2018 financial year, taking into account the recommendation from the Audit Committee.

Meanwhile, the Extraordinary General Meeting of Shareholders (EGMS) approved the acquisition plan for the Company’s shares by the Bank of Tokyo Mitsubishi UFJ, Ltd as described in the Summary of Acquisition Plan that was published in the newspapers on 26 January 2018. The EGMS also approved the Bank’s Recovery Plan in compliance with OJK regulation. The Recovery Plan is to ensure that systemic banks have established credible and feasible recovery options. Moreover, the EGMS approved changes in one article of the Company’s Articles of Association and the restatement of all articles in the Company's Articles of Association.

Profile of New Appointees in Board of Commissioners, Board of Directors, and Syariah Supervisory Board

For complete profiles of the new appointees, please visit here