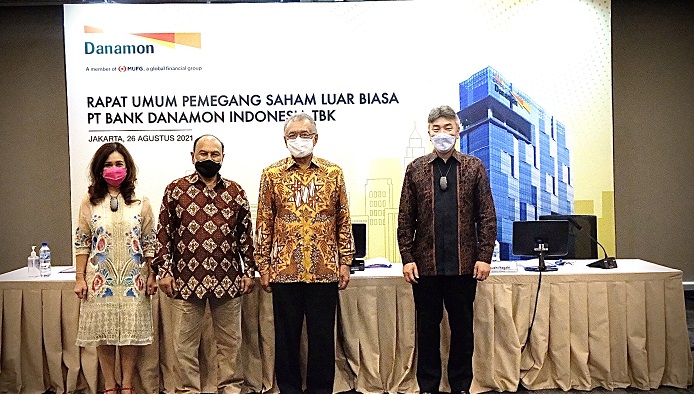 Jakarta,  August 26 2021  – PT Bank Danamon Indonesia Tbk ("Danamon/Company") this day held an Extraordinary General Meeting of Shareholders ("EGMS-LB") for the sole agenda of Approving Changes in the Composition of the Company's Board of Commissioners and Directors.
The EGMS approved the appointment of Dr. Halim Alamsyah as Independent Commissioner of the Company. Dr. Halim Alamsyah is a well-known and respected professional in the regulatory sector of the Indonesian financial industry. Currently, Halim Alamsyah serves as Expert Staff to the Minister of Finance in the area of Islamic Finance and Finance. The EGMS also accepted the resignations of the Company’s Deputy President Director Michellina Laksmi Triwardhany effective 4 September 2021 and Integrated Risk Director Adnan Qayum Khan effective 24 July 2021.

“The appointment of Dr Halim Alamsyah as Independent Commissioner further strengthens good governance at Danamon. With his extensive experience in the financial industry, we are confident that he can make a positive contribution to support and strengthen the bank's future growth. We also express our deepest appreciation to Michellina Laksmi Triwardhany and Adnan Qayum Khan for their dedication and contribution to Danamon. All directors and commissioners wish all the best and continuous success for Michellina Laksmi Triwardhany and Adnan Qayum Khan in their next personal journey," said Danamon President Director, Yasushi Itagaki.
Upon conclusion of the Extraordinary General Meeting of Shareholders, Danamon's Board of Commissioners comprised of the following:


This year's EGMS implemented health protocols based on regulations by Indonesia’s Ministry of Health and maximized the use of virtual technology to conduct the meeting. During the pandemic, Danamon has always followed health protocols in accordance with government recommendations, such as maintaining social distance, wearing face masks, providing hand sanitizers at the Company's branches and head office, and installing scanners for facial recognition and body temperature. By implementing the Work-from-Home and Work-from-Office regulations, Danamon complies with regulations by the local government and those set by the Minister of Home Affairs (Inmendagri) Number 15 of 2021 and Number 23 of 2021, Danamon enforced split operations for employees who work in critical units, established a Health Corner with swab and rapid test facilities, and required employees to accomplish daily surveys through the D-Care application to determine health conditions. The safety and health of employees remain top priority of Danamon which strongly believes that businesses will only continue to benefit customers and society when employees can work safely, comfortably and with peace of mind.


Work experience
Halim Alamsyah is well-known and respected in the regulatory sector of Indonesia’s financial industry. He began his career in 1982 as a Credit Analyst for Bank Indonesia’s Corporate Credit division. He then underwent economic and monetary research studies for over a decade prior to his appointment as Bureau Chief of Bank Indonesia in 2000. With his vast experience and excellent performance in Bank Indonesia, Dr. Halim Alamsyah was appointed by the President of Indonesia and People’s Representative Council of Indonesia (DPR) to take on the post of Deputy Governor of Bank Indonesia from June 2010 until June 2015. In September 2015, he was entrusted by the Indonesian government to the post of Chief Commissioner of the Deposit Insurance Corporation (LPS) which he served until September 2020. Dr. Halim Alamsyah currently serves as Advisor to the Minister of Finance for the sharia financial sector.