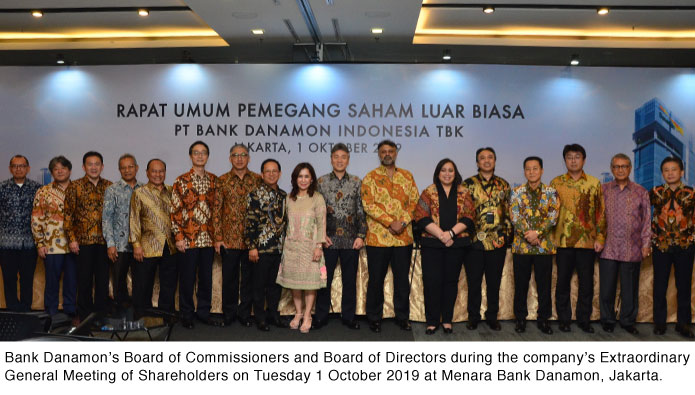 Jakarta, 1 October 2019. PT Bank Danamon Indonesia Tbk (“Company”) held its Extraordinary General Meeting of Shareholders (”EGMS”) today and approved changes to the Board of Commissioners, the Board of Directors, and in the Company’s Articles of Association.

The EGMS also approved the appointment of Mr. Yasushi Itagaki as the Company’s President Director. He is currently the Director of Global Alliance Strategy. Mr. Itagaki is a seasoned banker with more than three decades of experience in corporate, commercial and investment banking.

The appointment of Mr. Itagaki as a member of the Board of Directors will further strengthen Bank Danamon’s leadership through his expertise and international experience in the banking industry, particularly in the fields of Corporate Banking, Commercial Banking and Strategic Partnerships.

All of the above appointments are subject to fulfillment of regulatory requirements.

* Effective immediately after all government regulations requirements are fulfilled.

The composition of the Syariah Supervisory Council remains the same.

In addition to changes in the Board of Commissioners and Board of Directors, the EGMS also approved changes in one of the articles in the Company’s Articles of Association and the restatement of all articles within the same document.