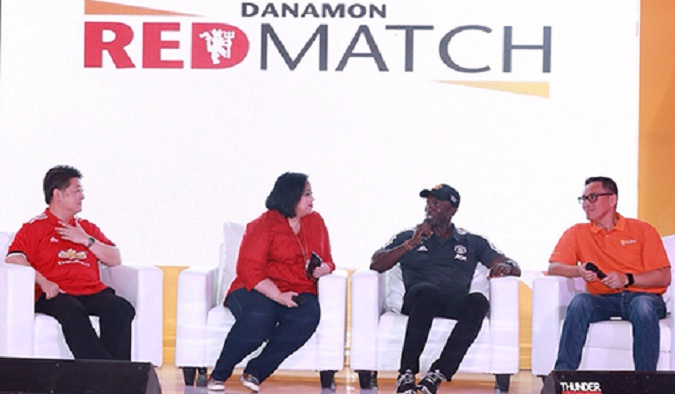 Jakarta, 4 August 2017.  PT Bank Danamon Indonesia Tbk (“Danamon”) today introduced several of its key programs, including the Red Match and Soccer Camp program in partnership with Manchester United as well holding the grand launching of the D-Point rewards program, which is an integrated point reward system applicable to all of Danamon’s products and services. Danamon also featured Dwight Yorke, a member of Manchester United’s 1999 treble winning side (winner of the FA Cup, English Premier League, and the Champions League), offering selected Danamon customers a chance to meet with the player in person. Dwight Yorke along with these new programs was introduced at Danamon Festival held from 4 to 6 August 2017 in Kota Kasablanka shopping mall in Jakarta, as part of Danamon’s 61st anniversary celebration.

“Through the Red Match Soccer Camp program, Danamon strengthens the values of its products and services to customers, especially those who are fans of Manchester United. The Red Match program allow Danamon customers unprecedented access to Manchester United, providing them a chance to meet up close with their favorite player or learning to play football the Manchester United way. Red Match also provides a once-in-a-lifetime experience of watching Manchester United live in Old Trafford. This is what Danamon is offering, an experience that money can’t buy,” said Michellina Triwardhany, Consumer Banking, SME, and Branch Network Director, Danamon.

The Danamon Red Match Soccer Camp is eligible for Danamon customers who have kids within the age 7 to 12 by opening a TabunganMU savings account with a minimum balance of IDR 25 million and a Deposit account with a minimum of IDR 50 million in balances.  Participating children will be trained by official Manchester United Soccer Schools Coach and will receive an official certificate signed by the coach and medal. All participants will also get other benefits, including free Jersey, Danamon Flazz Manchester United Pre Paid Card, and special dinner with Dwight Yorke for the first 20 participants at the Danamon Festival event.  The Danamon Red Match Soccer Camp activities will be held from 12th to 13th August 2017 in Jakarta, 16th to 17th August in Bandung, and 19th to 20th August 2017 in Surabaya.

“The D-Point rewards program is a form of our appreciation to our customers’ loyalty. What makes D-Point unique is the ability to earn rewards points from a variety of banking activities, whereas other rewards program are limited to one type of banking product. Customers also have a wide range of rewards to choose from when redeeming the rewards points. The can book airline tickets and hotels as well as buying the latest electronic gadgets. Customers’ enthusiasm is quite high for this program, with more than 470,000 customers already earning points through this reward program since May of this year,” added Michellina Triwardhany.

D-Point rewards points can be redeemed to earn airline ticket from more than 900 local and international airlines, including Garuda Indonesia, Singapore Airlines, Emirates, Qatar Airways and many more. Points can also be exchanged for hotel reservations in more than 450,000 hotels around the world and car rental in around 140 cities in Indonesia. Customers can also use the points to acquire gadgets, electronic goods, home appliance, Manchester United merchandises, magazine and TV subscription, and shopping vouchers. Customers can redeem their rewards points anytime and anywhere through Danamon online Banking website at https://www.danamononline.com.

PT Bank Danamon Indonesia Tbk was founded in 1956, and as of 30 June 2017 manages IDR 176 trillion in assets along with its subsidiaries, which are PT Adira Dinamika Multi Finance Tbk. (Adira Finance) and PT Asuransi Adira Dinamika (Adira Insurance). In terms of shareholding, 67.37% of Danamon shares are held by Asia Financial (Indonesia) Pte. Ltd., 6.57% by JPMCB-Franklin Templeton Investment Funds, and 26.06% by the public.

The Bank is supported by a network of more than 1,700 including conventional branches, syariah units, subsidiary outlets, Danamon’s ATMs, ATM Bersama, PRIMA, and ALTO across 34 provinces. In addition to physical network, Danamon’s services can be accessed from Danamon Online Banking, D-Mobile and D-Card mobile application, and SMS Banking.