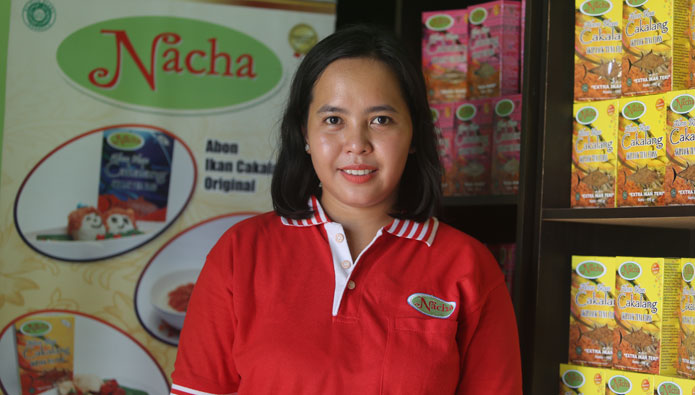 A person's ability and foresight to see the market opportunity is crucial, especially when it comes to business development efforts. Luckily, Nike Lidiyastuti has both of those entrepreneurship skills. Since she moved to Ambon in 2007, Nike has taken the opportunity of an incredible potential that has never been explored by the previous entrepreneurs.
As one of the cities that have been awarded The Best Fishery Potency in Indonesia, Ambon has an excellent improvement in fish production every year. By 2016, the production has reached 44,524 tons. President Joko Widodo (Jokowi) is even planning to make Ambon known as a “fish city”. Despite the abundance of these potentials, Ambon still lacks of variety products made from processed fish.
This condition is then utilized by Nike. She developed the idea of opening Abon Business as a typical souvenirs from Ambon. She started this business with a modest capital, but now her business, Abon Cikalang Nike, has achieved a massive success. She even won an award from Danamon Entrepreneur Awards (DEA) 2017 for Best Small Entrepreneur category.

Q: Hi, Nike. Would you please tell us how did you start this Abon Business?

A: Previously, I lived in Surabaya and worked in a paint distributor company, but in July 2007 I moved to Ambon because of my husband's job. Fortunately, the distributor company opened a branch in Ambon, so I was able to return to work again in 2008-2012.
The idea came up when I came home to Surabaya. At that time, I always brought fresh fish and smoked fish as souvenirs for my family there. In 2009, I began to ask myself, “Why do I just bring fresh fish and smoked fish whereas another city has variety products?” Since the fish resources in Ambon is huge, I tried to make fish Abon.

Q: How was the beginning of your business process?

A: I started to make fish abon in 2009 and of course I’ve had trial and error. At that time, I tried to make Abon just from the existing course. I bought two fishes, then processed them with frying pan and stove at home. Then, I decided to buy a hand spinner via online shop. It is true that there were many limitations here (in Ambon).
I made the Abon packaging with ice plastic and sealed it with candles, but it looks so untidy. Also, I just printed the label paper by myself in my office. So, my initial capital was really limited. However, I tried to sell it anyway. I left it in 2-3 stores and was able to generate sales for about fifty plastics.

Q: Do you have any competitors who sell similar products?

A: None at all. Most of gift shops in Ambon are selling eucalyptus oil, processed sago, and walnuts. Well, actually there was a shop that sells abon, but it was made in Banda and it was not always in stock. So, if we talk about the first processed abon seller in Ambon, that was me. In fact, I can manage to sell a hundred packs per month to four hundreds
made from Banda and it is not always ready stock at shop. So, if you say the first processed abon from Ambon, that was mine. In fact, I can sell about a hundred packs per month to maximum four hundred packs during 2009 – 2011.

Q: Did you do the production process by yourself or with the help from your employees?

A: I already have employees, it used to be two employees. When one of them resigned, I was struggling a lot because I didn’t know who was going to stir the Abon batter. See, the stirring process itself takes six hours. During this time, you must stand in front of the stove. As the business grew bigger, we found ourselves feeling overwhelmed. When there was too many orders, we would cook the Abon twice a day. Therefore, I think it just seems impossible to cook that many Abon using manual method.
That’s why in 2011, I ordered a coffee roasting machine and modified them to be an Abon machine. You could say that this decision has become one of my turning points too since it cost me around 52 million IDR. We realized that this is a serious business. We must generate higher sales so that we could have a positive turnover. So, when the machine arrived, I finally decided to resign from the company I worked at because I wanted to really focus on my own business.

Q: What made you resign from work to focus on this business?

A: I once went to a souvenir shop in Bali to have some sort of business consultation with my friend. I wanted to make a fish abon as something tourists can buy in Ambon. I learned that if I run the business while working at a company, the result won’t be maximum. My friend asked me to just focus on one business and do everything in my power to make it succeed. After that I decided to resign from my previous office.

Q: How did you manage to transform a coffee machine into an abon maker?

A: At that time, I realized that the coffee machine works like abon maker. So, I told my husband, he’s an electrical engineer. Then we created the concept and brought it to a workshop in Ambon.
Unfortunately, it was rejected by the local workshop since they had no resources needed to build the machine. We considered to bring this idea to the workshop in Mojokerto, near my hometown in Surabaya. I asked my mother to help me supervise the machine making process. And finally the machine was finished after thirteen months.

Q: How did you manage to transform a coffee machine into an abon maker?

A: At that time, I realized that the coffee machine works like abon maker. So, I told my husband, he’s an electrical engineer. Then we created the concept and brought it to a workshop in Ambon.
Unfortunately, it was rejected by the local workshop since they had no resources needed to build the machine. We considered to bring this idea to the workshop in Mojokerto, near my hometown in Surabaya. I asked my mother to help me supervise the machine making process. And finally the machine was finished after thirteen months.

Q: Now, how many abon maker and employees do you have?

A: I have two abon makers and eleven employees.

Q: What do you think about the human resource in Ambon?

A: Ambon is a city, but many people here came from inlands. They don’t even know that garlic is actually cultivated, they think that it’s produced by the factory. So I thought to myself, “They really need to learn more about basic things.”
So, up until now, I haven’t allowed my employees to keep their own money because I know it will run out in an instant. If they want to buy something, they have to asek from their manager first. This way, they can save money.

Q: How about the process of making a business certificate and how is the impact for your business development?

A: Actually, I just managed to build a decent production house so that BPOM could visit in in 2015. At that time, I joined in a lot of SME business workshops that were held by the local government. During one of those workshops, I invited an employee of the Industry and Trade Ministry to come to my production house. She gave me a lot of inputs for the production house so that I could get HACCP, a food safety certificate. Once I got the certificate, I realized that it was very useful. Today, my products already have six franchises in Makassar.

Q: What’s the next target for your business?

A: Honestly, I want to build a factory in Makassar since we generate most sales there. Moreover, I also want to do online marketing.

A: I received three awards in 2017, which are Paramakarya of the Ministry of Labor, Siwalima Award, and Danamon Entrepreneur Award (DEA) 2017. For the DEA, I found out about this award from WhatsApp group, the Youth Entrepreneurship. At that time, the deadline was only a few days away, but I managed to apply. I did not expect to win an award from DEA, let alone having a tremendous opportunity to work with new resellers.

A successful business begins with the awareness of opportunities on your environment. Nike Lidiyastuti managed to prove it through the business of Abon Cikalang, which she built in Ambon. As the time goes by, Nike keeps trying to grow her business even bigger and she even received an award from Danamon Entrepreneur Award 2017.
If you want to be succeed in running business like Nike, but don’t know where to start, Danamon Solusi UKM can help you to expand your business through three options: Ruko Investment Solutions, Business Investment Solutions, and Working Capital Solutions. Determine your business needs and let Danamon Solusi UKM help you fulfill it!